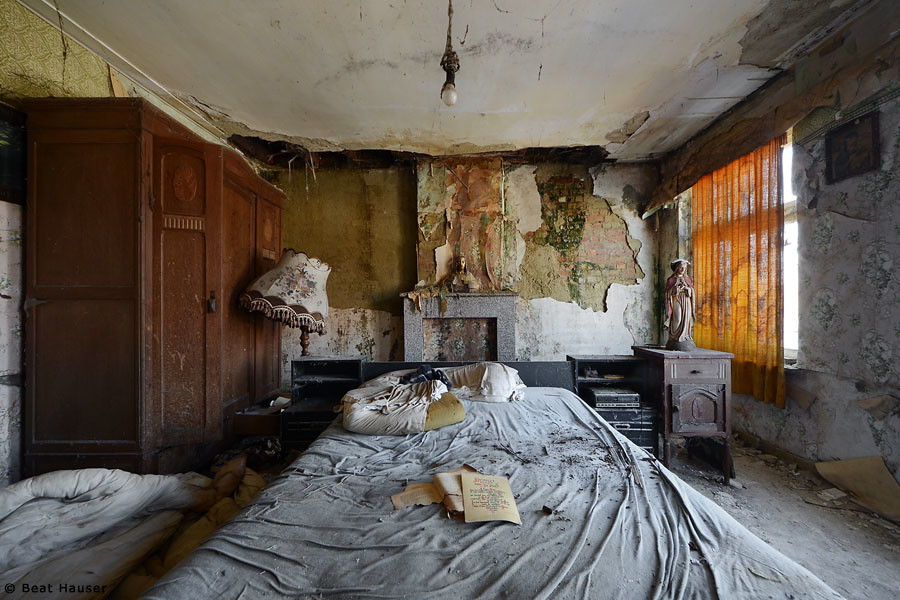 Some things are unknowable. A person’s secrets may be revealed by the things they leave behind; but what are they, those supposedly uncovered secrets? Words, ideas…dry and dead as dust.

The rest of the letter had crumbled. She dropped the packet, which turned into large flakes of what had once been paper. Something about the writer’s tone annoyed her. They seemed to be urging someone not to feel guilty about a secret, or perhaps to release what ever secret they were hanging onto, she thought. It felt insidious, specious, manipulative. There was a grimy pink ribbon around the little bundle of letters, which made her think that a woman had received them. So probably a man had written them – or perhaps it was another woman. It was impossible to tell now.

She turned back and picked up what was left of the bundle, looking for a date, but it had crumbled. She put it back down on the bedroll, beside the two skeletons.

Once, shortly after she had left Bradbury Station and returned to Earth, she had collected these things. Letters and calendars, even some diaries – all on real paper, in boxes and tubs, biscuit tins and keepsake chests, from the houses new Returners were given to gut, sort, and detonate as they tried to return the city bit by bit to the earth. After a while she gave up. She had filled her quarters with bundles of crumbling, bad-smelling paper full of the panting, wheedling, longing, fussing and lamenting of lives that had ended over a century before. Well before the Flight had begun. Things in the letters had begun to take up space in her dreams. Like the people who had written them, the stories got mixed up and bred, producing offspring until her head was full of breeding stories, the very thing she had rejected in the Station.

She kept walking through the house, climbing the stairs. Her rebreather reminded her that she had only four minutes of filtering left. The house was part of a mid-twentieth century development. Small identical cubes with small identical gardens, now full of grey dust and unidentifiable windblown trash. In the half-century since the Bradbury Era began, the house had been turned over five times she thought, maybe six. Each round of scavenging began further in. You could count them like tide marks, or tree rings. The letters had been written in a paper era, long before the Breakdown, maybe a century and a half ago.

There was a bedroom at the end of the hall, with a much more recent corpse on the bed. The body was turned to the window. She squatted down to the level of the bed and looked out at what the sockets had stared at for twenty years. Above the garden wall was a green fringe of tree tops, the first regrowth of the Manzanares forest. She wondered if the scavenger had died before or after the trees had shown over the wall. There was no way of knowing. She thought of the letter. Some things are unknowable.

What had the writer meant? They had talked about secrets. But there was a difference between something unknown because it was deliberately withheld, and something unknown because it was impossible to grasp. The former was a secret, the latter a mystery. Clearly, they were different. And the reasons for their being were different too, and lent different weights and tones to the knowledge they imparted. A mystery told you something about the world, and about the limits of your own capacity to know. A secret told you something about the secret-keeper, and how they saw you. What some scavenger, alone and dying on a ruined earth, had seen as they died, wasn’t a secret. It was a mystery, rendered ungraspable by the nature of time, and the privacy of death.

She went into a second bedroom, which had been emptied of furniture. A fire had been laid beneath the window; the carpet was burned in a neat, hearth-shaped rectangle. She thought about the people abandoned to the radioactive winds, the plastic oceans, to wars that began between nations, and ended between scavenger tribes. It was impossible to know what their life had been like. Had Scavs sat here, sheltering from the dust, telling secrets as they burned through the floor? You kept secrets because you feared things would be worse if they were discovered. So there was no point in secrets when the worst had already happened.

More to the point, she suddenly thought, if the people involved in the secret no longer existed, did the secret itself exist? Was it like the sound of the tree falling in the woods – it needed to be heard for it to have been a noise at all. States of affairs were what the world manifested. But secrets, which were a perspective on states of affairs, needed people to exist, the way a lie could not exist without words. Humanity really was abhorrent, she thought. She stood in the empty room and smiled briefly. In this world without people, secrets and lies had also perished.

Her rebreather flashed red three times and blinked off. She had ten breaths-worth to return to the baler. She moved quickly down the stairs, crushing the bundle of letters beneath her heel.